This afternoon it was my great pleasure to spend an hour chatting with violinist and Haydn Enthusiast [sic], Jason Sundram. Jason is visiting from America’s West Coast where he works for a social media company in data visualisation. While in the UK he is talking in Oxford and London about his technological expertise and how he is combining his work with his passion for Haydn’s music. 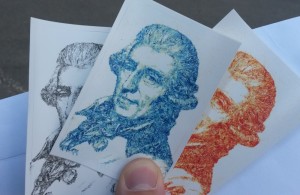 Jason performs Haydn’s string quartets with friends back in San Francisco, calling themselves The Haydn Enthusiasts. The patterns and detail revealed by their performing this music led Jason to investigate visualised data groups for Haydn-related information: the frequency of key signatures, tempo markings – even the variations of tempi used in performances of Haydn’s music.

Jason can begin to see how taking the organised data from Haydn’s oeuvre and presenting it visually not only presents a different way of (literally) looking at the music but may also contribute to the way in which information can be shared. The concept of the ‘graphic score’ has moved from avant-garde whimsy to an acceptable educational tool in the past fifty years. Jason’s work – as this slightly mesmerised layman understands it! – means that visual graphics generated by either notational or audio renderings of music may be shared and used in a similar diversity of ends.

The applications of this has Jason thinking in Haydn-related tangents. ‘Imagine’, he told me, ‘how great it would be to get information about the Grassi bust of Haydn and then print a copy using a 3D printer to put on your piano at home!’ Here is a young man with a very definite set of priorities for the the use of his computational gifts!

You can read more about The Haydn Enthusiasts at facebook.com/haydnenthusiasts