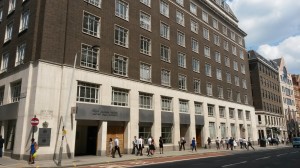 Today we spent a bit of time metaphorically chasing Haydn around London during his visit from January 1791 to July 1792. Our investigation is part of the research process with which we hope to secure a commemorative plaque for Haydn in due course. A fair bit is known about Haydn’s hugely successful visit to Britain and London in particular but we are trying to tie down the facts to ensure the integrity of any monument that we sponsor.

Today we were in the British Library to read a copy of the Royal Musical Association‘s Monographs – this one entitled ‘Salomon and the Burneys: Private Patronage and a Public Career‘ by Ian Woodfield. The backdrop that Woodfield paints of the London during the period of concert-going expansion from the 1780s is fascinating. He also makes it clear that the Burney family – beyond the celebrated musicologist Charles – were very important catalysts in the musical chemistry of society. Haydn visited Charles Burney at the ‘Chelsea Hospital’ shortly after arriving in London as well as visiting the Burney family home in Titchfield Street for a salon-style evening of music-making.

From there I returned to that grand opus that rewards the Haydn scholar like no other. HC Robbins-Landon’s ‘Haydn in England, 1791-1795‘ has the breadth to expand on Woodfield’s purposefully slim volume. Cross-referring the two, I came across facts that will provide struts on which to found our project.

Most interestingly amongst these is that Haydn was obliged to stay in Holborn on his first night on English soil. Salomon was in the process of establishing the composer’s Great Pulteney Street lodging and so on the evening of 2 January 1791, Haydn was put up by a friend of the impresario, John Bland, above his music shop at 45 High Holborn.

The building of the time, like all the buildings of the period, is no longer standing. Today, the block of 42-49 High Holborn (pictured, top) is the Central Family Court. Like the pristine edifice that stands on the corner of Hanover Square where the Hanover Rooms once bore witness to Haydn’s subscription concerts during the subsequent year, the building is aesthetically opaque to the legacy of the space on which it stands.