Posted on 14 February, 2015 in Uncategorized

“Composer and pianist John McCabe CBE has died at the age of 75. A person of striking honesty, humour and integrity as well as being a fine musician, John managed a successful dual career as both pianist and composer.

He studied at the Royal Northern College of Music under pianist guru Gordon Green, who fired his interest in Haydn by playing a Richter recording of one the keyboard sonatas. John recorded all the Haydn sonatas for Decca between 1974 and 1976, setting new standards of musicianship and insight into the music. The discs are still in the catalogue.

John was a member of the Haydn Society of Great Britain’s Committee of Honour. His article ‘Five works inspired by Haydn’ (Haydn Society Journal 1993 p 44 et seq) describes the diverse ways in which the older composer influenced John’s own music. He ends with the words ‘Haydn is a model who sets himself challenges, sometimes obviously, sometimes subtly, within the context of music that seems spontaneous and unforced. Whatever one’s success in trying to learn from his lessons, the effort is unfailingly enjoyable and revealing.'” 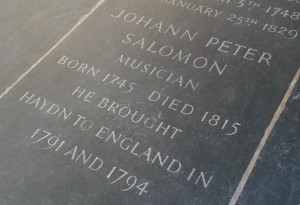 Posted on 2 February, 2015 in Uncategorized

We are delighted to be able to share the news that Sir Neville Marriner has agreed to unveil our plaque to Haydn on 24 March. Sir Neville Marriner celebrated his 90th birthday last year, an event that was an opportunity for everyone to reflect on the conductor’s unique and sustained contribution to the musical life of this country. As the founder of the Academy of St. Martin in the Fields, Marriner has always been noted for his performances of later 18th century music, his huge recording legacy, and his work in the fine Milos Forman film of Mozart’s life Amadeus (1984), for which Marriner supervised the soundtrack recording.

Details for the unveiling of the plaque at 18 Great Pulteney Street are still to be finalised but we hope that you will be able to join us there on the 24 March at midday.