Posted on 26 February, 2014 in Uncategorized

I’m really looking forward to taking Haydn’s London Ladies to the English Haydn Festival later this year. I’m especially looking forward to performing the music in the show for the first time with fortepiano, on which it would all originally have been played. In Haydn’s London Ladies I detail the relationships that Haydn developed with four women in particular. They are the poetess Anne Hunter, the pianist Therese Jansen, the soprano and composer Harriet Abrams and, most importantly at a romantic level, the beautiful widow and music-lover Rebecca Schroeter.

There are two other fascinating women whom I have had to leave out of my narrative because they are not part of Haydn’s ‘London story’, but who were also important to him, both personally and historically.

The first of these is Lady Emma Hamilton, famous society beauty, muse of the painter George Romney and mistress of Lord Nelson. Haydn met her in Vienna in 1800 when she was travelling with her husband Sir William (Ambassador to Naples) and Nelson, trying to get back from Sicily to London without bumping into any of Napoleon’s troops. They attended a performance of Haydn’s Missa In Angustiis(which Haydn later re-christened the Nelson Mass on hearing the news of the Admiral’s death at the Battle of Trafalgar) and stayed for a few days at Eisenstadt. Emma, in particular, was crazy about music and wanted to spend time with Haydn. In one of a series of concerts during their stay, Emma sang an aria from Haydn’s cantata Arianna auf Naxos, accompanied by the composer, and he presented her with manuscripts of two of his songs. Despite showing signs of her age, Emma was still one of the great beauties of Europe and no doubt Haydn would have enjoyed her company for this as well as her considerable musicianship.

The other important lady in Haydn’s life remained in Vienna but corresponded with him regularly. She was Maria Anna von Genzinger, wife of Prince Esterhazy’s physician, daughter of the minor aristocracy on her mother’s side and a keen amateur musician. She arranged movements of Haydn’s symphonies for the piano, and held soirées for the musical elite of Vienna, at which Haydn was an honoured guest. Their correspondence is important as a demonstration of Haydn’s capacity for deep feeling (frustratingly, of the letters he exchanged with Rebecca Schroeter we now have only her side of the correspondence) and some commentators consider that Haydn was in love with Maria Anna. He may have been at some point, but he also understood the realities of their relative social positions, and there is no evidence of him attempting to form any actual romantic attachment. Maria Anna died at the early age of 38 while Haydn was in London, and the great Haydn scholar HC Robbins Landon proposed that his F Minor Variationsmay have been written in response to this news. Haydn had already dedicated his Piano Sonata in E flat Hob.VXI/49 to Maria Anna and written to her, “I recommend [the second movement] especially to your attention for it contains many things which I shall analyse for your Grace when the time comes; it is rather difficult but full of feeling”.

Posted on 16 February, 2014 in Uncategorized 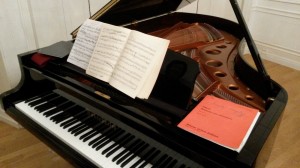 This week we attended a short recital of keyboard music by Joseph Haydn at the Austrian Cultural Forum near Knightsbridge. The event had been convened by the pianist Alisdair Kitchen in order to launch a unique project, in which he intends to record a selection of the Haydn Piano Sonatas and release them online via the social media-curating platform Flipboard. Placing the recordings of the sonatas on either Soundcloud or YouTube (for desktop use, Flipboard being a mobile application) Alisdair proposes to collect other pertinent articles hosted on various platforms online into the Flipboard, to create an interactive booklet of information, images and writing to complement his recordings. The first Flipboard has already been published here.

To accompany the launch, Alisdair played the Andante with variations in F Minor, Hob. XVII/6 (1793) and the Sonata in E flat No. 62, Hob. XVI/52 (1794), with the central movement of the Sonata in E flat No. 59, Hob. XVI/49 as an encore (a more detailed review of the performance may be read here). We were very interested not only to hear his performance but also to hear of his plans for harnessing the free platforms available online for disseminating and promoting Haydn’s music and other disparate media associated with it. We were also indebted to the Austrian Cultural Foundation for their hosting of the evening’s event, both their warm welcome and reception that followed.

Posted on 14 February, 2014 in Uncategorized

Welcome to the Haydn Society of Great Britain.

This Society exists to promote a wider knowledge and understanding of the music of Joseph Haydn and his circle.

We hope that you have a chance to look around this site. It may answer some of your questions about the composer and inspire you to get to know more about his music.