Posted on 21 November, 2014 in Uncategorized 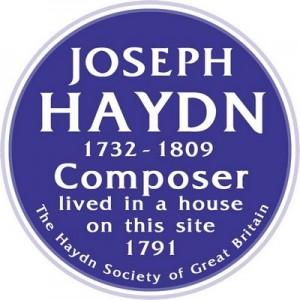 We are delighted to be able to tell you that today we reached the fundraising goal for the plaque to Haydn in London!

We hope to be able to tell you soon when we will actually have the plaque installed and ready to be unveiled. Until then, keep checking back for more news about this very special project. Here’s a video that Clare McCaldin recorded at the Royal College of Music in order to celebrate this special moment.

Posted on 12 November, 2014 in Uncategorized

At the half-way stage in our fundraising campaign for the Haydn plaque, we are thrilled to have received a message of support from Sir Mark Elder. He says:

“Haydn was an extraordinary composer. His contribution to symphonic and choral music was exceptional, not only in his development of the form but also because of his influence on other composers. His two visits to London gave him a new creative lease of life and he wrote some of his greatest music for this city. I am delighted that Haydn’s presence in London will at last be commemorated with a plaque, and I wish the Haydn Society every success with the campaign.”

To hear Sir Mark talking more about Haydn’s work, have a look at this BBC documentary from 2011, “Genesis and Genius“.

As one of this country’s most respected musical figures his enthusiasm for Haydn’s music and the project is very welcome and carries significant weight.

We have also been encouraged by comments from all sorts of other people on social media, sharing why Haydn and his music still matter to them. One added at the end of a conversation:

“[it’s] the least I can do for my favourite composer, and the donation represents only the tiniest fraction of the gratitude I have for what his works have meant for me during my life time.”

It makes us feel quite dewy-eyed to realise how many people out there really love Haydn! It’s also nice to feel that what we’re doing is appreciated. At the time of writing we have just received our 100th pledge via Kickstarter – we’d love to think there could be 100 more.