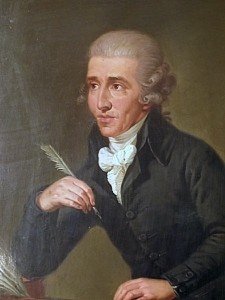 1732
31st March (Franz) Joseph Haydn is born in Rohrau on the Leitha (Lower Austria); Today there is a museum there which commemorates both Joseph Haydn and his brother, Michael.

1740-1749
Choirboy (Sangerknabe) in the choir school of St. Stephen’s in Vienna; Haydn receives a musical education, as well as lessons in other subjects. As a choirboy, he takes part in performances of church music at St. Stephen’s, at other churches in Vienna and at the Viennese court.

1749-1758(?)
Largely self taught and working as a freelance artist in Vienna, Haydn composes ecclesiastical and operatic music, string trios, sonatas, dances, organ concertos, divertimenti for various arrangements and his first string quartet. In the early 1750s he lives as a tenant in a garret in Vienna’s 1st District.

1753-1757
The Italian composer Nicola Antonio Porpora resides in Vienna. Haydn later describes him as his only teacher.

c. 1758-1761
Haydn is musical director in the service of Count Ferdinand Maximilian Franz Morzin. He lives from time to time at the Count’s summer residence, the Palace of Lucavec near Pilsen. It is here that Haydn’s First Symphony is written, as well as other compositions.

1761 1st May
Haydn enters the service of Prince Esterhazy in Vienna, at first as deputy conductor of his orchestra. Haydn principally in Eisenstadt.

1762-1790
Prince Nicholas Esterhazy 1, Paul Anton’s brother, becomes Haydn’s new employer. Haydn succeeds in making the Prince’s orchestra into one of the best in Europe at the time. For this he composes overtures, symphonies, concerts, suites, minuets, serenades and operas.

1766
Death of Head Conductor of the orchestra, Gregor Joseph Werner. Haydn succeeds him as Head Conductor. The Prince moves into the newly-built Esterhazy Palace (Esterhaza) at the south-eastern end of Lake Neusiedl and this now becomes the most important location for Haydn’s work.

1766-1775
Haydn buys a house in Eisenstadt and seldom visits Vienna.

1778
Haydn sells his house in Eisenstadt.

1785 15th January and 12th February
Haydn visits Mozart at his Viennese apartment. Mozart’s string quartets dedicated to Haydn are played. Haydn and Mozart were friends, even if they did not meet each other very often.

1790-1792
Haydn’s first trip to England. He composes his first six London symphonies. Performances of his works in London, organised by Salomon.

1791 8th July
Haydn is awarded an honorary doctorate of music by Oxford University.

1793 14th August
Haydn acquires a house in a suburb of Vienna.

1794-1795
Haydn’s second trip to England, together with his copyist and valet Johann Elssler. Six further London symphonies are composed, as well as works for piano and several other pieces. Haydn makes numerous concert appearances and is feted by London society.

1794-1832
Prince Nicholas Esterhazy II succeeds Paul Anton II. Haydn is commissioned to compose a mass for the nameday of the Prince’s wife Hermenegild each year. This results in the last six great masses, written between 1796 and 1802.

1796 26th December
Haydn’s Paukenmesse (‘Kettledrum Mass’), conducted by the composer himself, is performed for the first time at the Church of the Piarists in Vienna.

1797 12th February
Haydn’s anthem Gott erhalte is sung for the first time at the Vienna’s Burgtheater.

1797 Summer
Haydn moves into his newly-extended house in Vienna.

1799 19th March
First public performance of the Creation in the Burgtheater.

1803
Haydn, presented with many awards in the last years of his life, receives the great gold Salvator Medal from the City of Vienna. Haydn composes the String Quartet op. 103 (only two movements), which is regarded as his last composition.

1808 27th March
Haydn makes his last appearance in public on the occasion of a performance of The Creation in the main hall of Vienna University.

1809 7th February
Haydn signs his last will and testament.

1809 31st May
Haydn, age 77, dies of exhaustion at his house in Vienna (Haydngasse 19 in Vienna’s 6th District) in the presence of his servants.


Denis McCaldin’s blog for BBC Radio 3 in the bicentennial year of Haydn’s death, 2009

The BBC Four ‘The Birth of British Music’ documentary on Haydn (2009) presented by Charles Hazlewood (in 5 parts via this link, 1st part here)

Clare McCaldin on the women that Haydn met on his visits to London in the 1790s.

The BBC Documentary ‘Genius and Genesis’ (2011) on the development of the Symphony, presented by Simon Russell Beale

A 1985 documentary presented by Alan Bennett on Haydn at Esterhazy